New Delhi & Pune, India, 15 February, 2018: KPIT Technologies (BSE: 532400; NSE: KPIT), a global technology company specializing in IT consulting and product engineering, announced today that it has signed a two-year Statement of Intent (SOI) with NITI Aayog (National Institution for Transforming India) to support and mentor select Atal Tinkering Laboratories (ATL) for secondary level school children across the country, under the central government’s flagship program, Atal Innovation Mission (AIM), to promote innovation and entrepreneurship in Indian schools, universities and industries.
Atal Tinkering Laboratories or ATLs are open-ended workspaces where students can give shape to their ideas through hands-on ‘do-it-yourself’ learning modules and acquire critical skills to innovate with technology. They provide them with opportunities to go beyond the school curriculum, work with tools and equipment to understand concepts in Science, Technology, Engineering, and Mathematics (STEM), including Chemistry, Electronics, Robotics, IoT (Internet of Things), 3D Printing, etc., and improve inventiveness. The labs are equipped with low-cost rapid prototyping tools such as 3D Printers, Robotics, Electronics and Communications kits, and easy-to-learn graphic user systems that assist in creating products and solutions to address everyday problems. 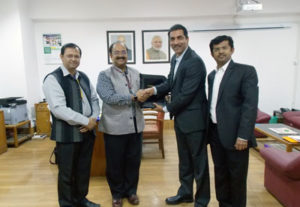 Mr. R. Ramanan, Mission Director, AIM, and Mr. Anup Sable, CTO, KPIT recently signed the partnership agreement at the NITI Aayog office in New Delhi. Mr. Unnat Pandit, Operations Head for ATL and Mr. Tushar Juvekar, Global CSR Head, KPIT were also present on the occasion.
KPIT, which has been working towards bridging the gap between textbook knowledge and practical learning of science with its signature Chhote Scientists program, will along with AIM select Ten ATLs across Jammu & Kashmir, Chhattisgarh, and the North-Eastern states of the country. It will depute an Innovation Guardian for nurturing the creative talent and innovative mindset of the students and additionally leverage its network of employees and customers to induct volunteers for faster implementation of the program. To augment learning, KPIT will organize workshops, boot camps, innovation contests, and science exhibitions during the course.
Mr. R. Ramanan, Mission Director, Atal Innovation Mission, NITI Aayog said, “The government’s emphasis is on giving impetus to building a knowledge economy that represents growth led by education, a robust R&D culture, and a fast-evolving entrepreneurial ecosystem. With this partnership, KPIT will enable us to augment our vision of promoting grass-root innovators with a bottom-up approach and set the precedence for greater public-private partnerships in advancing the country’s education system.“
Mr. Anup Sable, Chief Technology Officer, KPIT, said, “We are delighted and honored to be given an opportunity by NITI Aayog to contribute towards their goal of fostering a million children in India as technology innovators. In less than a decade India will have the largest population in the world and will need growth accelerators like tinkering labs and incubation centers to foster innovation and entrepreneurship in the next generation of our workforce.”
KPIT will also provide two volumes of Chhote Scientists booklets to help over 2500 schools under the ATL initiative to prepare curriculum and teaching aids. It will also provide online teaching aid for execution of the referenced experiments in the booklets for entry-level ATL students. Further, in collaboration with its partner NGO Jnana Prabodhini, KPIT will work on developing an advanced syllabus which will be at the next level to the scientific learning imparted through the Chhote Scientists platform.
In the future, KPIT, in association with the Atal Innovation Mission, will additionally conduct teacher’s training programs for ATLs, apply psychometric tests to measure the improvement in the scientific temperament of students, and potentially come up with quarterly newsletters for all ATL schools.