Today there has been a significant increase in development of electric vehicles. Smart charging is the intelligent way forward, where charging can be shifted based on grid loads and in accordance to the vehicle owner’s needs.

The ISO 15118 Standard is divided into 5 parts as follows:

The remaining parts of the standard deal with wireless communication. 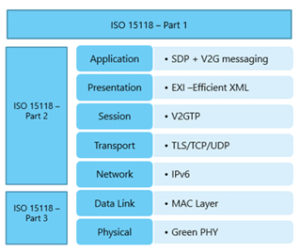 ISO15118 part 1 defines the general requirements and use cases. ISO15118 Part 2 standard provides the requirements for the top 5 layers of the Open System Interconnection (OSI) model viz. Application Layer, Presentation Layer, Session Layer, Transport Layer and Network Layer. The EV and EVSE communicate with each other over Power Line Communication (PLC). During the communication, EV and EVSE exchange various messages over IPV6 UDP/TCP Protocols. These messages have been described in ISO 15118 Part 2. The Data Link Layer and Physical Layer functionality is described in ISO 15118-3.

The Generic test architecture reference model defined by ISO15118 –Part4 is as follows:

These test cases are only applicable for communication protocol defined in part 2 of the ISO15118 standard and do not consider any power flow between EV and EVSE. The conformance test cases in part 4 are specified for OSI network layer 3 and above.

KPIT has developed a generic test framework for ISO15118-Part4 conformance testing and a simulated EVSE stack using CANoe and VT system from Vector. The reference architecture mentioned in section 3 was mapped as mentioned below. 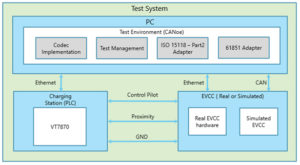 The test system architecture in a simulated environment is mentioned below: 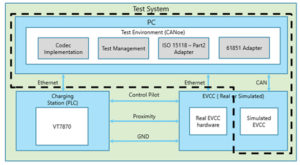 The test system architecture in a real environment is mentioned below: 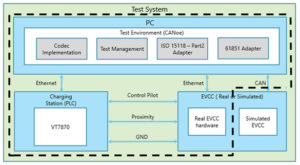 The below mentioned network architecture along with Graphical User Interface (GUI) was used for conformance testing. A complete test module to test whether the EV meets the ISO 15118 – 2 standard has been implemented. This consists of the all the 197 ISO 15118-4 Conformance Tests.

OpenSSL libraries have been used for the following:

The Conformance test suite developed by KPIT using industry standard tools is easy to use and can be easily customized or extended to include additional test cases apart from the ones mentioned in the standard. It also ensures that the communication between EV and EVSE is according to the protocol mentioned in the standard and ensures that the EV is interoperable with independent implementations of EVSE.